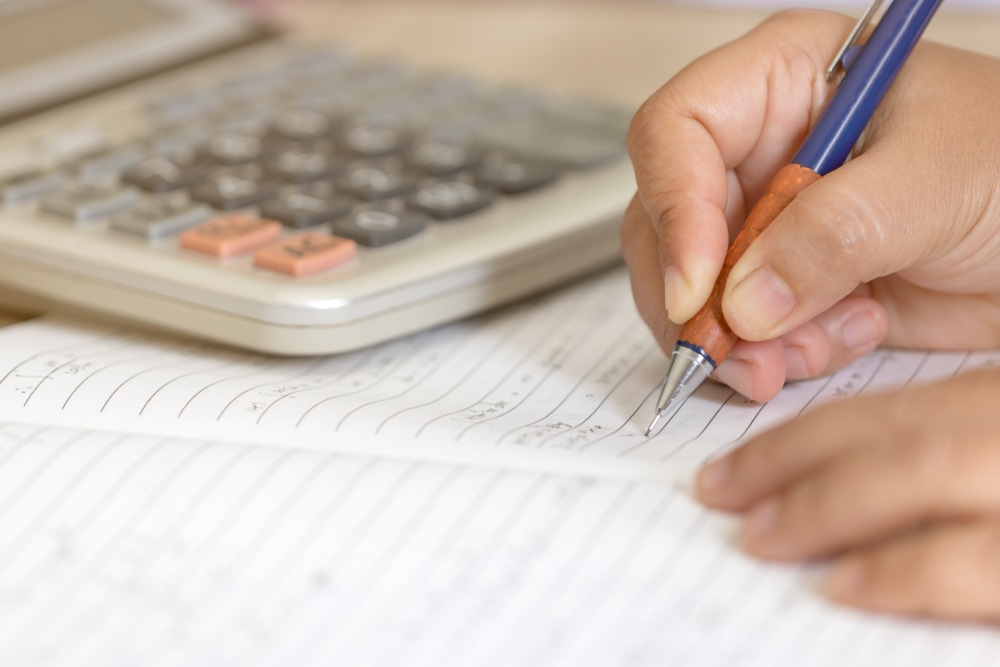 You already know that it is incredibly important to read exam questions carefully, to be clear about what you are being asked to do. However, identifying the command word that is being used can help you to take this to the next level.

Examiners use command words to indicate the type of answer that they want you to give. And, although it may seem obvious, understanding the exact requirements of each command word will really benefit you in the exam – it will help you to focus your answers, avoid wasting time and ensure that you pick up all the marks available!

AQA publish a complete list of Science command words on their website, and OCR and Edexcel include a list of the relevant command words in their specifications.

Let’s have a look at some examples:

Name two planets in the solar system that are more distant from Earth than Jupiter. [2 marks]

The question says ‘name two planets’, so that is what you do – don’t try to cover all of your bases by writing down every planet you can think of!

To get both marks you can write any two from Saturn, Uranus or Neptune. If you wrote Mars, Saturn and Neptune you would only get 1 mark. Yes, you have named two correct planets, but you will lose a mark for an incorrect one (Mars).

Describe the motion of nitrogen molecules in a sealed container at room temperature. [2 marks]

The word ‘describe’ means that you should give an account of what is happening. You do not need to give a reason.

A typical mistake is for students to only give one statement because they haven’t noticed that there were two marks available – this means they can only get one mark at most!

Always start by writing down the formula that you are going to use. For this question, you will earn 1 mark for recalling the correct formula:

Next, replace the letters with their numerical values, but be very careful – only the v is squared:

There are two marks available for the calculation, giving three altogether.

Sketch the graph for current against voltage to show the voltage across a standard lightbulb being increased. [2 marks]

‘Sketch’ means that the correct shape axes and shape of the graph is all that is needed for both marks. No numerical data is required. 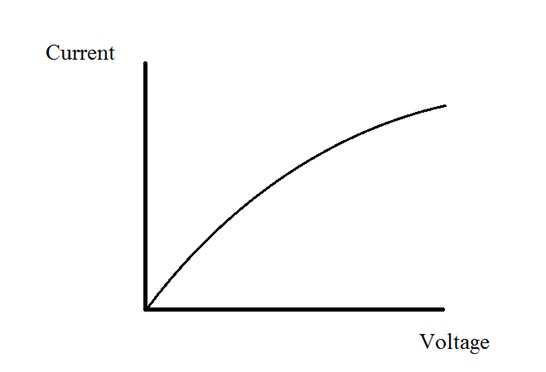 Compare and contrast the production of electricity by hydroelectric power stations and by wind turbines. [4 marks]

Both are expensive but produce no greenhouse gases. [2 points of similarity]

There are plenty of suitable sites for wind turbines, but there are limited locations that are suitable for hydroelectric power stations.

The output from a wind turbine is much more variable than that from a hydroelectric power station. [2 points of difference]

A spring is stretched by having weights suspended from it.

Deduce the value of the spring constant from the table below. [2 marks]

To answer ‘deduce’ questions, you need to work something out using your knowledge and the information you are given.

In this case, by recalling and applying the formula F = kx to two or three rows of the table, you can see that k has the value 5 N/cm.

It is always a good idea to check your answers carefully.

Using the table above identify an outlier and explain how it might have occurred. [2 marks]

‘Identify’ means that you have to select information from a source. ‘Explain’ means that a justification or reason for the outlier must be given.

Selecting an extension of 2.4 cm for a force of 10 N would obtain one mark. An explanation suggesting that the elastic limit of the spring has been exceeded would secure the second mark. In this case, it would also be acceptable to suggest an incorrect reading of the extension.

A typical mistake is to give the outlier but forget to give a reason.

Predict what the extension of the spring might be if all the weights except for the 2 N weight are now removed. Justify your answer. [2 marks]

To answer this question, your prediction should be that the extension will be greater than 0.4 N. This can be justified by explaining that the elastic limit of the spring has been exceeded, so it is permanently damaged and cannot return to its original extended length.

You are given a battery, variable resistor, ammeter, voltmeter and a fixed resistor, R. Draw a diagram of the circuit that you would set up to show how the voltage and current vary through the resistor, R. [3 marks]

Your diagram must be clear, as shown below, with no gaps in the circuit. 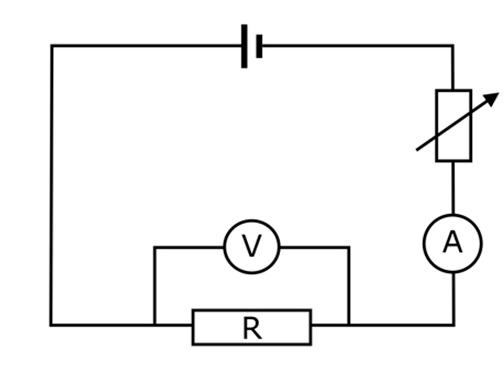 A common mistake is to place the ammeter and voltmeter in the wrong positions.

Using the circuit from the question above, a student obtained the following results:

Outline the procedure used to obtain the results. [3 marks]

The word ‘outline’ is similar to ‘describe’. It requires a brief explanation of how the experiment was carried out. This should include which variables were controlled and which was changed. For instance, the voltage of the battery and temperature of the resistor were kept constant. The current was varied by changing the value of the variable resistor. For each current, readings were taken from the ammeter and voltmeter and recorded.

Estimate a value for the current when the reading on the voltmeter was 5 V. [1 mark]

To answer this question, you need to find an approximate value from the table or by mathematical methods.

Your estimate should be given to one decimal place to match the other values for current in the table.

Use the table of results to plot a graph of current against voltage. [3 marks]

If you are asked to ‘plot’ a graph, it needs to be accurate (not a sketch). You are usually given graph paper or a grid to work on.

You are often expected to choose the correct axes for each variable and label them. A sensible scale is also needed. Your points must all be plotted accurately, using a small cross for each one, and a line of best fit should be drawn through them.

In this example, the line is straight and all points would be on the line or close to it. That isn’t always the case and you will have to use your judgement to draw the best straight line or curve.

Below is an example of a line of best fit from another experiment. Here only one point is on the line, but there are an equal number of points above and below it. 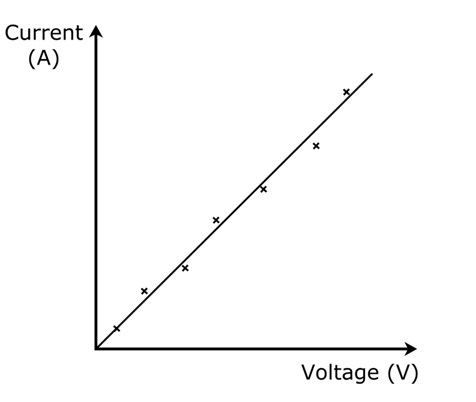 Typical mistakes when plotting a graph include:

Suggest a more reliable way of carrying out the experiment. [2 marks]

To answer this question, you need to give an alternative method that is an improvement on the original experiment.

Define moment of a force. [2 marks]

‘Define’ means that you have to specify the meaning of something.

For this example, you need to recall the formula for moment of a force and then put it into words. The formula is:

Moment of a force = force ´ distance (perpendicular to the force)

The moment is the turning effect of a force. It is equal to the force multiplied by perpendicular distance (from the pivot to the line of action of the force).

If the examiner wants you to write down the equation itself, they will use the command words ‘give’ or ‘write’, i.e.

Give / Write the formula for the moment of a force.

State and explain what happens to a balloon filled with helium as it is released from the ground and gains altitude. [4 marks]

The balloon will expand. [1 mark]

Students often lose marks on questions like this, which require a two-part answer, because the second part gets overlooked, i.e.

Our new GCSE Physics: Key Skills pack contains over 150 higher-tier exam-style practice questions, which cover all the commonly used command words. They have been written by subject experts and can be downloaded for use at home immediately after purchase.

Check your answers against the included mark scheme to make sure you have understood each question properly and have given an appropriate response to pick up all the marks available. 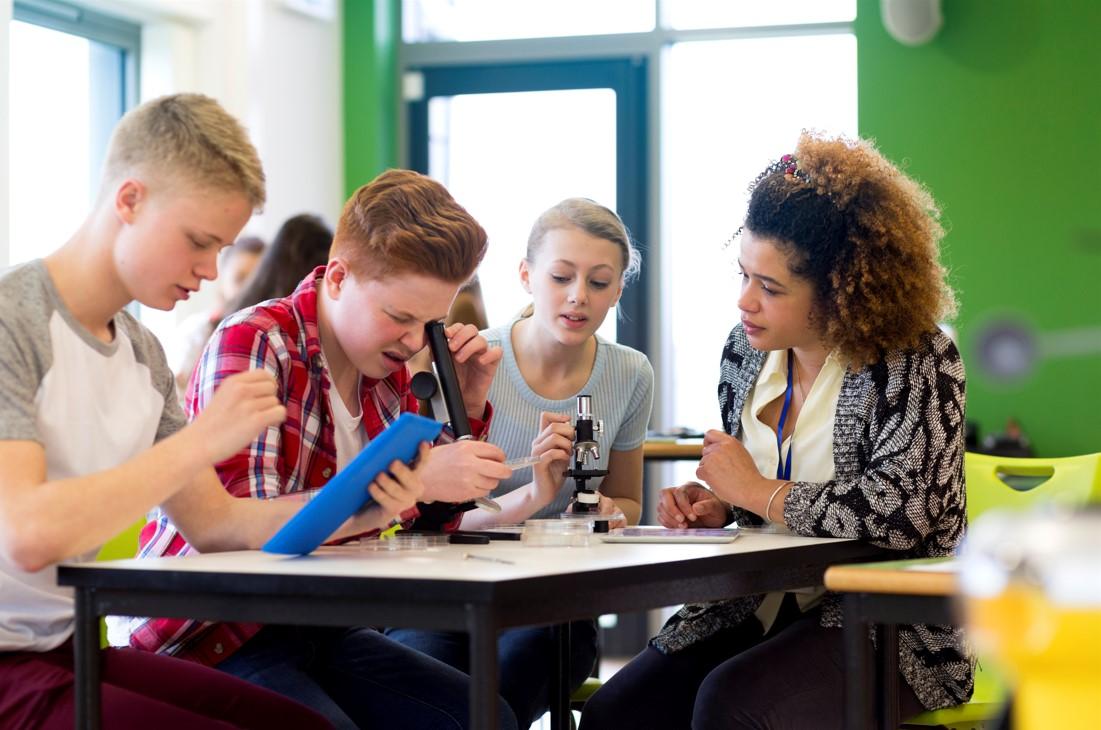 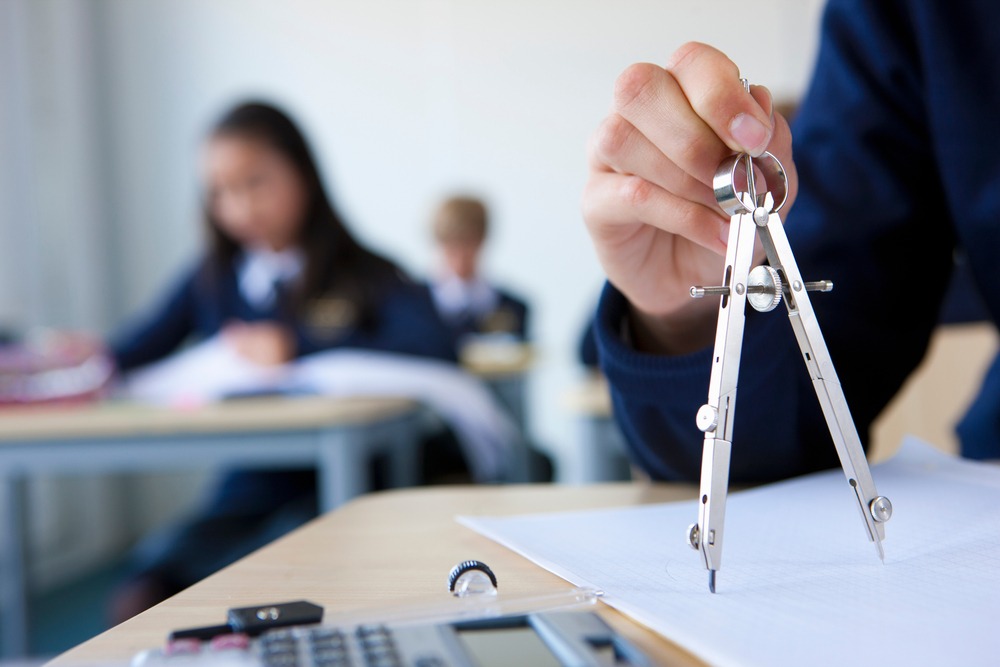 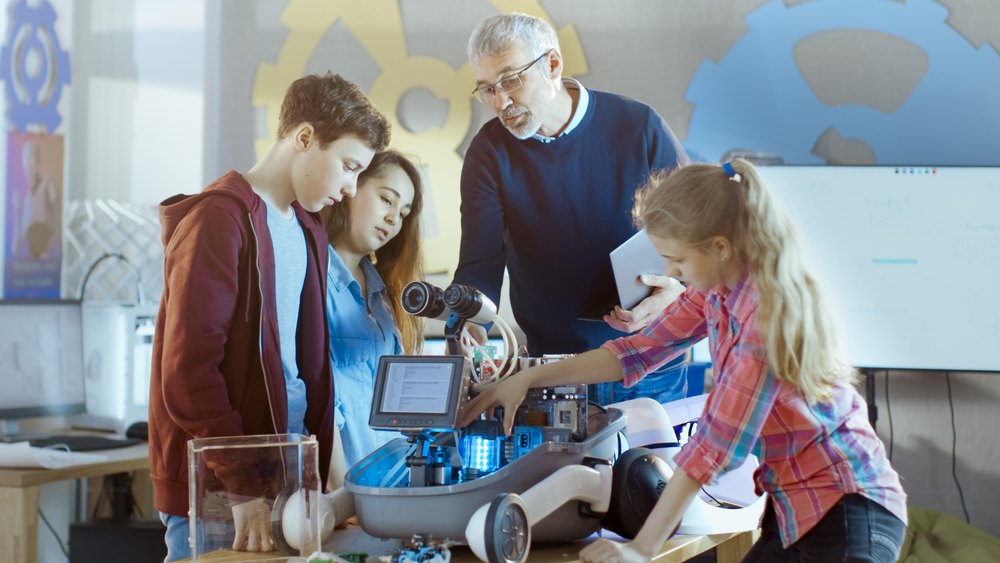 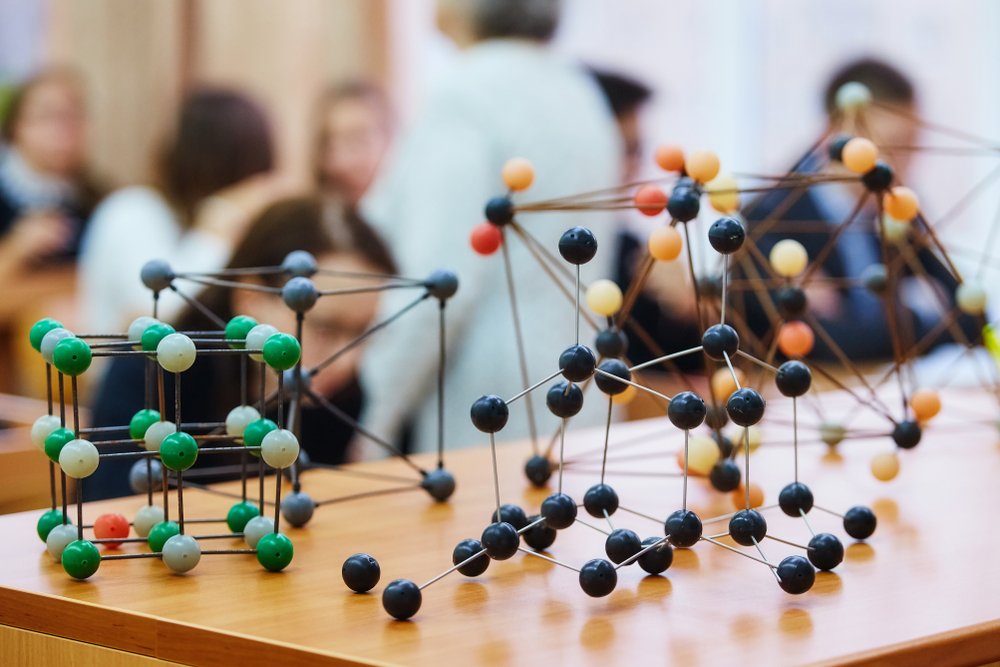